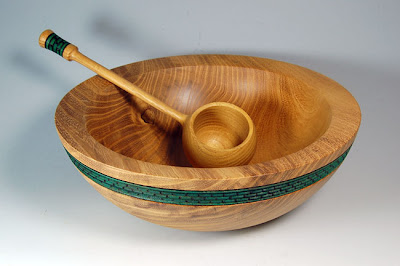 This is the second bowl and spoon set I have made and I think I will be doing a few more. For me the matching spoons add something to a bowl,( no, not just literally) making it a much more ornamental/artistic piece, rather than a simple receptacle for fruit or keys!
The decorative band on these has 5 bars with a pyrographed brickwork design on the middle 3. The band has actually been dyed blue but the yellow of the timber (Acacia) makes it appear green.
The bowl is 12" wide with a gentle inward sloping rim and the spoon 11" in length and is turned from a single piece of wood on two axis. The design on the spoon is identical to that of the bowl but is slightly bigger as making it the same width would not have looked right.
I have a few ideas for future sets involving mounting the spoons but that is something to be thought about more before making them.
Posted by Unknown at 12:37 No comments: 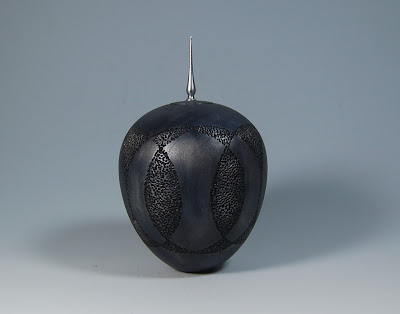 As the title suggests this piece was about making patterns or more specifically, patterns using circles around a hollow form. Some interesting ones can easily be made simply by overlapping circles in various ways and then filling in parts of the overlapping pattern, be that with colour, texture, piercing etc. This particular pattern occurs 3 times around the form, if it is turned 60 degrees the pattern is different as shown in the second pic. The overall effect is what seems to be 2 different patterns 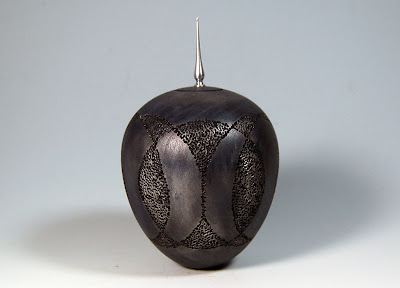 both occurring 3 times around the form but each being made from the other. I hope this gives a nice visual appeal as the decoration can be seen in 2 different ways.
The dark areas are filled with random dots burned in with a pyrography unit, the edges of the burned in areas are made purposefully imperfect to compliment the well worn looking patina to the finish to give that well worn and old look that I seem to be producing lately.
The whole form was dyed royal blue after the pyrography and a silver gilt cream rubbed over sparingly to give the metallic patina. The finial is aluminium and timber used Acacia.
Posted by Unknown at 11:44 No comments: 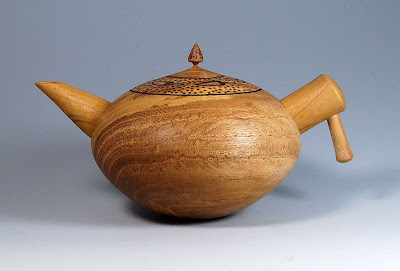 Well when I made the last teapot I said I wasn't going to get into making them and here I go making another one!
This one is a slight revision of the firsts design, I wasn't happy with the spout on the first or the position of the handle. On this one the spout and handle leave the body of the teapot at the same place as each other(only on different sides!), which I feel gives the piece more balance. I have gone for a 'fatter bellied' pot as well, the sort of shape that I hope wouldn't be out of place 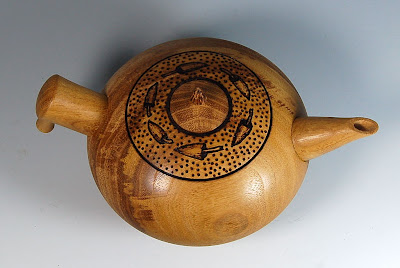 on an old ladies tea table!
I'm much happier with the shape of this one and the angle of the 'contemporary' handle sits at, this handle even feels good and stable when you hold it as if to pour.
The decoration is based on the common this time of year Psilocybe Semilanceata mushroom, there is one sprouting up from the lid(hence the slight upward reach of the lid) and more in a ring design around the top.
Posted by Unknown at 11:20 1 comment: 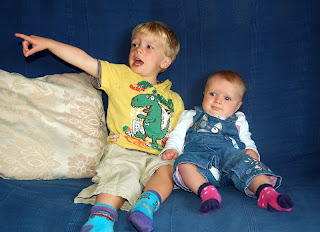 Well here we are, six months on from starting this blog. I began my writings here on March 12th 2011, four days after the birth of my lovely little daughter Daisy and my first post was a picture of her and myself grabbing 40 winks on the sofa! So it seems right to post another picture of her now marking a milestone in my blogging and her life. She is pictured here this time with her big brother, my son Dylan (2). As I took the picture he spotted a spider crawling up the wall he's pointing and exclaiming "There's a big spider Daddy! Put it outside."
I can't express what these two mean to me, I just can't put into words the feelings I get when little Daisy smiles at me or Dylan comes and gives me a kiss on the cheek out of the blue and says "I love you Daddy." All I can say is life with my own little family is so much more than it ever was before in my youth, when I thought I was having the best time going.......
Anyway here we are, I've enjoyed this first six months of my blog and am pleased that it has, as of ten o'clock this morning received 2175 pageviews, and attracted 15 followers(something I wasn't expecting!). I hope it remains interesting for you all to read in the coming months and as enjoyable for me to write.
Thanks all,
Johnny
Posted by Unknown at 00:59 No comments: 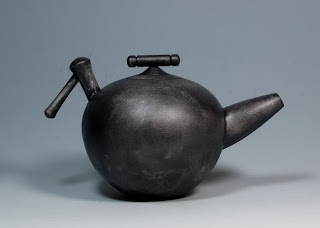 This is the first teapot I've ever made, its not something I think I will get right into making but found the exercise in how to fit it all together interesting and indeed 'educational'.
I came up with the idea a while back after seeing many designs posted on various forums and yesterday I stumbled on the webpage for the AAW's Teapot Auction and was reminded of my design. This coupled with the fact that I fancied a change from turning the things I've been doing lately....
My idea for the design was for a 'traditional' shaped body for the teapot with a contemporary twist in the design of the lid and handle. The topper on the lid is to make a 'T'(the symbol for tea!) shape, the handle is simple but modern looking(I hope) being made of two 'peg' shapes. The 'old dirty metal' finish was achieved by colouring it with a base coat of black with silver gilt cream applied very sparingly using my finger! My finger is the only tool that seems to be able to create the uneven coat I want by way of a great deal of rubbing! The dimensions are 4" high and 7" long.
Posted by Unknown at 12:49 No comments: 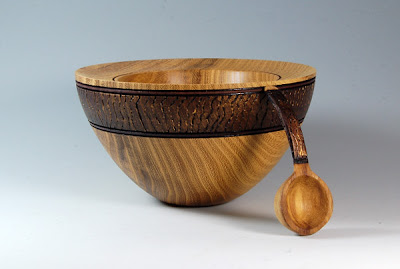 The continuing wet weather is keeping me from the day job but is allowing me to be productive in my turnings, so I can't grumble too much.
I haven't made a bowl (to be just a bowl) for ages and this Acacia wood I have with its yellowish tones was just begging to be made into a bowl with a nice purple band. Yellow and purple are just such a great combination. The band has been pyrographed with random vertical lines and also had some metallic gold rubbed in unevenly to give an old, worn but luxurious look.
The matching spoon I admit was an afterthought, I figured it adds another dimension to the piece, it is also the first spoon I've ever made and I did just wonder whether 'I could'! It is by no means perfect but I feel it does compliment the chunky 'rustic' feel of the bowl. Not that any of that matters now, my 2 year old son spotted the little spoon and loved it, "Daddy make spoon for my in shed?" he said. Well what could I do? He's never asked for a turning so sincerely, so I said "Just wait until Daddy has photographed it", he sat patiently beside me while I took the photos being as good as gold, when I had done the little lad ran off with his new possession. I guess I'll make another spoon for it.......
Posted by Unknown at 11:22 No comments: 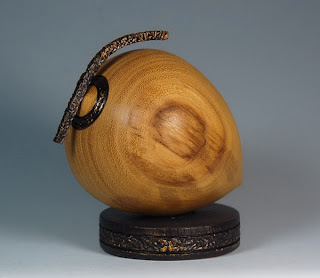 Here is my latest offering, thanks to a rainy afternoon and my wife having her friend with a 2 year old daughter round for the kids to have a Sunday afternoon 'play date' as they seem to call it, I got a bit of time to myself in the shed :) and what's even better is they sent me out coffee and pink wafer biscuits as I worked!!
This design has been around in sketch form for a while, since I was doing lots of pointy ended forms a few months back.
The design is based on the idea of a particle travelling through space at the speed of light (maybe I've watched too many physics documentaries!!) The form being the particle itself, rounded at the front in the direction of travel and coming to a soft point at the other end. The base is to represent the space its flying through and the finial represents space/time being warped by the particle as it flies along at the cosmic speed limit. A better explanation might be that of the shock wave that can be seen infront of a plane about to break the sound barrier only in this case with space and time rather than air(OK my physics may be a bit shaky.....).
The base is made from an offcut of Elm, ebonised and then 'metalised' by rubbing a tiny amount of gold paint over it which gives a nice,dirty bronze like appearance . The finial is also a small piece of surplus Elm that has been steamed for about half an hour and then set in shape before finishing. A few coats of satin lacquer provide the finish.
Posted by Unknown at 13:14 No comments:

First piece turned with the new batch of Acacia. 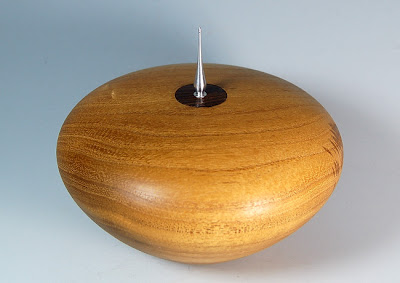 I was quite keen to try out a piece of my newly acquired  Acacia to see how it was to turn. I managed to get out to the shed at a fairly reasonable hour and clutching my third cup of coffee of the day, selected a suitable piece of the timber. I went for the smallest of the blanks I had cut yesterday which was 6" wide and 4" thick and set about making a side grain hollow form. I'm loving the grain patterns you get in these side grain forms at the minute and am probably making far too many of them!
I must admit that turning the Acacia is a delight, for such a dry timber (this is absolutely bone dry), it cuts like a dream and I was sending long shavings across the shed in streams :) A light touch on the outer finishing cuts with the gouge sharp leaves a fairly nice surface with ease. The hollowing was just as easy and the Keltons once again made really light work of the process, although with this particular shape  my laser guided captured bar hollowing rig hasn't the reach to get right into the corners and as a result I have to do what is the most awkward bit by hand with the hooked Kelton in a handle (they fit nicely into the big Munro handle). I must order some steel to make an articulated one which I'm sure would reach into the very corners of these with ease and with the simplicity of laser guidance.
The hole is 7/8 of an inch wide with a flush fitted lid in Bocote and an aluminium finial. The finished piece measures just over 5 1/2 inches wide by 3 3/4 inches tall (without finial).