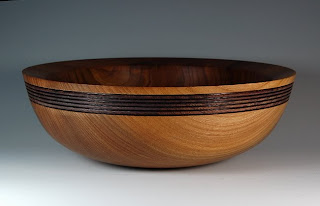 I'm currently producing things suitable for the craft fair we will be taking part in on the eleventh of June in the quaint little village of Edingthorpe in Norfolk. It will be held at the beautiful and fascinating thousand(ish) year old village church in conjunction with the 'Edingthorpe open gardens' event. 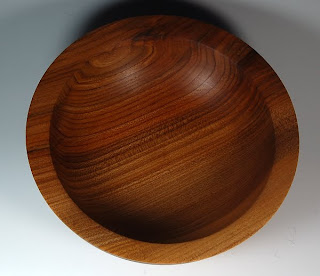 I have some gorgeous pieces of English Elm and I am making a couple of 'usable' bowls from it to sell. Me being me I couldn't leave them quite plain! The band on this one is a new style for me.
Flat top beads. burned with a wire burner between the bands, dyed and finally a tiny amount of silver gilt cream which just changes the appearance of the band in a really subtle but pleasing way.
I really like the look of the band and I think I will make an opposite version, that is, the flat beads over the entire outside of the bowl with a natural band around it where the band is on this one. That however is another project for another day!
Posted by Unknown at 13:22 No comments: 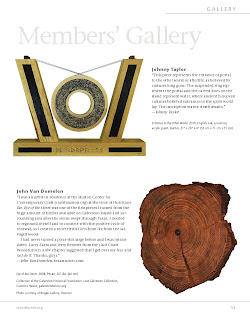 I was extremely happy to discover that my sculpture from last June entitled 'Entrance To The Other World' was published in the AAW's April 2011 edition of 'American Woodturner' journal. It was really nice (and almost shocking) to see it published along side works of other respected woodturners.
I think this is my proudest woodturning moment to date, right up there with that magical moment of producing my very first bowl on the first day of owning a lathe!
I do not get the magazine normally but thanks to the editor (and fantastic wood artist) Betty Scarpino, I am currently waiting for my copy to arrive from the US courtesy of the AAW. I hope to frame it and put it on the wall (wife allowing!) as it is the first piece of work I have had printed in any publication.
Posted by Unknown at 14:44 4 comments:

Just a quick post to say I finally have a new, better and most importantly up to date website. It is not yet perfect and there are refinements to be made but it is up and running. The gallery page needs more images added, my webcams not working just yet but I hope to sort that any day but as a 'bare bones' website I'm pretty happy with it so far.
I need to give my good friend Tim James a huge thankyou for taking the time and having the patience to put it all together for me and for continuing to make small improvements to it. Tim I shall be making you something special in the shed by way of thanks!!!!
Please take a look and let me know what you think of it, just click here to view.
More work to be posted soon!
Johnny
Posted by Unknown at 02:54 2 comments: 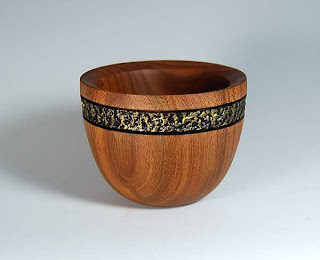 My sister persuaded me to have a table at the craft fair in her village in early June, I have only done one of these before and at the time swore never to do another (I didn't enjoy the experience much!). That will be two years ago by the time we do this one and so I'm hoping it may prove to be a better experience this time around.....
After agreeing to do it, it occurred to me that I didn't have any 'craft fair fayre' as it were. I don't think it would be very successful if I turned up with a table full of my creations without a
collection of more simple, affordable items with me. Having this in mind I have started to make a few smaller, practical,items that I hope will appeal to people browsing the fair. It will also use up some of the smaller pieces of wood that inevitably build up through being too good to throw away but not really big enough to be used in any of my designs! The small bowl pictured above was made with this in mind, it was an offcut of endgrain Elm from a hollow form made a while ago. It turned out to be a lot of fun to produce, at just 3" wide and about the same in height 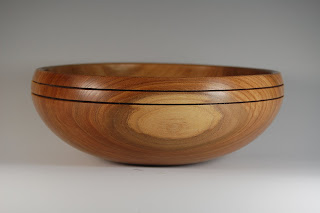 it took very little time to produce and yet still gave me the satisfaction I get from creating any pleasing form. The textured and coloured band I just couldn't resist adding as I think they completely change the 'feel' of the piece and go with that gorgeous Elm grain and colour so well.
The next one is a simple curved shape bowl again Elm although this time 10" wide with just a couple of accent lines to give a bit of interest. Again it was a nice quick piece to produce and I hope is more practical than most of my usual work. Of course I will have some of my more creative pieces there also but I need to make some more easily saleable items such as pens, coasters etc
Posted by Unknown at 13:12 No comments: 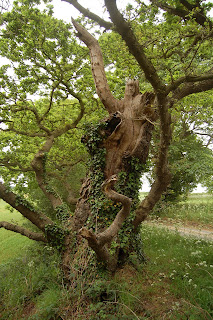 Just a very quick post of this wonderful old Oak tree I took some pictures of on my travels. I had a friend visiting and I took him to see this old tree, it must be incredibly ancient and is in the 'growing down' stage of its life. 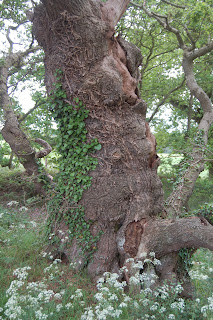 I have looked at this tree several times before but never noticed the human figure at the top(right hand picture), who seems to be gazing out, perhaps the spirit of this several centuries old Oak. 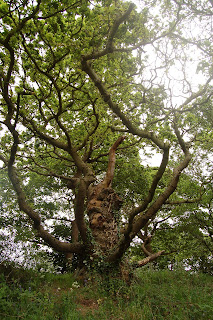 I hope it continues to survive for many more years to come in its quiet spot surrounded by wild flowers. I must admit to often looking at trees ad weighing them up in terms of how many bowls I could turn from them but this really brought home the thought and appreciation of how long our timber takes to grow and what a precious resource trees are.
Posted by Unknown at 15:56 No comments: 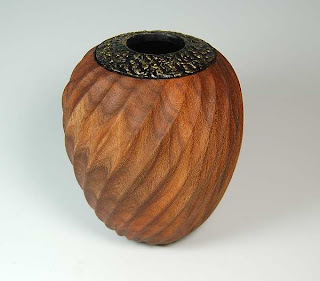 What a hot day today has been! The workshop seems even hotter than outside too. I have spent my day mostly between working on the piece pictured, drinking coffee in the sun and playing in the garden with Dylan! He comes up to the open workshop door(he can't get in!....safety first!) and with the sweetest little way says "Daddy, outside please", I just can't say no to that.
Between the playing and coffees I made this small hollow form to try out my new 'Microplane' rasps on. These were recommended to me by a friend who could not speak too highly of them, and after using them I can see why. They are far better than a 'surform' although they work on the same principle, the finish achieved from working gently with the 'fine' blade requires not much 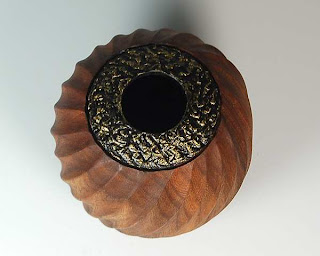 sanding(thats always good in my book!)
The form was turned from English Elm to a thickness of 5mm as I wanted the finished piece to be quite light in the hand. The carving was mainly done on the lathe with the form mounted between a friction drive and tailstock as this seems to give good access to the sides of the piece. The last inch or so at the top had to be done with the piece cushioned in a vice. It was then hand sanded down to 320 grit, the top ring textured and coloured with acrylics and a coat of oil applied to the main body.
There could easily be many more designs done around this idea as it is so versatile and tidily produced with the new tools.
Posted by Unknown at 15:10 No comments: 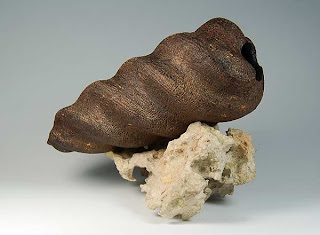 Sunday night of another four day weekend! And what a great weekend I'm having so far! My wife wanted to see that wedding and as determined as I was to get on with something useful, I found myself 'drawn in' to watching it, with the occasional mad dash into the garden to keep Dylan entertained!
After it was all over and a spot of lunch the family went out and I resumed my earlier plan of turning something! There have been a few marine based pieces on the wows lately and it reminded me of a shell form I had sketched a while ago. I also thought it would be a good item to use a similar texture effect to
the bowl posted below. The hardest part was going to be carving the four spiral twists which make up the shell, I have only tried this once before and it was a single spiral on a scrap piece 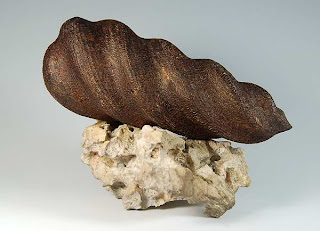 of wood which I did without having the best tools for the job, needless to say its not on display anywhere!! I didn't know how this one would turn out but I am always of the attitude 'if you don't try you'll never do it'. I started by hollowing out the form to a thickness of 3/4" , I did this very roughly as I was considering it an experiment and didn't really expect to get the finished carving right, I now wish I had of finished the inside better!
The turning and carving were all done Friday afternoon, the texturing took most of Saturday but at least was done sitting in the sunny garden! The texture is built up one dimple at a time with a pyrography unit, the pattern following the spirals as you find in many shells. This was then cleaned and dyed a red/orange colour and gold gilt cream sparingly applied with an oil finish.
After all that texturing today was spent as a family day, we had a nice five mile walk in the sun by the river and then chips in the car by the sea later!! Tomorrow we are invited to my brothers for a BBQ :)
Posted by Unknown at 15:16 No comments: